COVID-19 Updates: We have begun to meet on Thursday evenings at 7:00 pm at the College Church Commons. Please register here if you plan to attend!

Looking for a Historical Novel to Read? 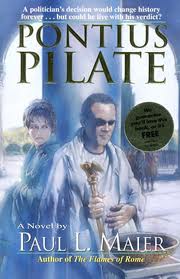 A few years ago I asked a friend about some good research on Pontius Pilate and the events surrounding the crucifixion of Christ and he recommended Pontius Pilate: A Novel by Paul L. Maier.  He explained his unique recommendation by telling me that Dr. Maier was a top-notch historian who wrote a historical novel about Pontius Pilate in order to help people understand the historical background of the politics and Roman Government that figures so prominently in the gospels.

Here is how Dr. Maier describes how he constructed his book in the forward:

"The trial would become the central event in history. But for the judgment of one man, a faith shared by nearly a billion people today might not have been born. At least it would not have developed as we know it. The decision of the Roman prefect of Judea on the day called Good Friday may have stemmed from pressures of the moment, but it was conditioned by the turbulent politics of the Mediterranean world at that time. What really happened at that most famous of all trials? Was Pilate's judgment motivated by cowardice, expedience, or necessity? Where did he come from, and what became of him afterward-his man who unwittingly switched the flow of history into a new channel? This book proposes several answers.

There is too little source material on Pontius Pilate for a biography, yet too much for recourse to mere fiction. These pages attempt a compromise which might be called the documented historical novel. It seemed an appropriate genre for a case, such as Pilate's, in which much authentic data is available, yet with insurmountable gaps in the information.

In constructing this account, I first searched for all surviving bricks of fact, then cemented them together with regrettably fictional mortar into what I hope is something of an accurate restoration of the original structure of Pilate's career. As a documentary novel, it differs from regular historical fiction in that no liberties were taken with the facts: the bricks were used as discovered, without alteration. Reference notes on the most significant and controversial points of scholarship are provided at the end of the book. Most of these notes involve original sources, some of which provide new historical data.

To aim for accuracy, I adopted the following rules: 1) All persons named in this book are historical characters; no proper name has been invented-if it is not known, it is not given. 2) No portrayal of any personality, no description of any event, and no episode, or even detail contradicts know historical fact (unless by author's error). 3) Only where all evidence is lacking is "constructed history," based on probabilities, used to fill in the gaps. Even here, as much use as possible is made of authentic historical data as ballast, also in dialogue. Important constructed segments have been identified as such in the "Historical Note" at the close of the book." (Paul L. Maier. Pontius Pilate: A Novel (Kindle Locations 10-22). Kindle Edition.)

Six Ways We Can Ask God to Act from Psalm 90

Join us Thursday evening at